The David Miller Show
Weekdays 6 to 10am 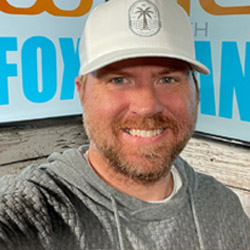 3:00 P.M. - 8:00 P.M. with Ryan Fox:
Ryan never truly remembers a time he was not around a radio station. His earliest memories are of walking the halls, and helping out any way he could, at his family's radio stations in western Oklahoma. Eventually, they let him run the board, and after that, the rest was history.  It didn't take long for him to realize this is what he wanted to do.
After graduating from Hobart High School in Hobart, Oklahoma, Ryan was accepted, and graduated from, one of the world's top film schools at the University of Southern California, home to such prestigious alumni as George Lucas, Ron Howard, and Steven Spielberg, to name a few. But he always new radio was his true passion.
Ryan has been heard on the air at legendary radio stations, like 99-5 The Wolf in Dallas, and Go Country 105 in Los Angeles, and his show, which features celebrity guests and lots of fun 6 days a week, has also been beamed coast to coast to over 200 stations on the Westwood One Radio Networks, and around the world for our troops on the American Forces Network.
Although it may sound a bit cliche, one of Ryan's favorite quotes is 'Do what you love and you'll never work a day in your life'. And "because I've been so blessed to have always done what I love", Ryan says, "every day has felt like a dream."

WBEJ Radio FM 107.9 and AM 1240 provides a strong outlet for your business to advertise and reach a large audience. Your advertising dollars will be well-spent with WBEJ! Contact Sales Manager Barton Edens at (423) 542-2184